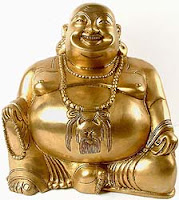 Over the years I have collected laughing fat Buddha's so now I have quite a few of them dotted around the house and I confess that I love each and everyone of them! They cheer me up and I love having them around me, so I thought I would share with you what they mean as they all have different meanings.


Back Ground information on the laughing Buddha's
The celestial Buddha named Hotei or Pu-Tai is best known as the jolly Laughing Buddha. In China, he is known as the Loving or Friendly One. He is based on an eccentric Chinese Ch'an (Zen) monk who lived over 1,000 years ago and has become a significant part of Buddhist and Shinto culture. Because of this monk's benevolent nature, he came to be regarded as an incarnation of the bodhisattva who will be Maitreya (the Future Buddha). His large protruding stomach and jolly smile have given him the common designation "Laughing Buddha."

The Laughing Buddha's image graces many temples, restaurants, and amulets, as he has become a deity of contentment and abundance. The image of Hotei is almost always seen carrying a cloth or linen sack (that which never empties) which is filled with many precious items, including rice plants (indicating wealth), candy for children, food, or the woes of the world. He is patron of the weak, poor and children.
Laughing Buddha statues depict a stout, smiling or laughing bald man in robes with a largely exposed pot belly stomach, which symbolizes happiness, good luck, and plenitude. Some sculpture has small children at his feet. Another item that is usually seen with the Laughing Buddha figure is a begging bowl to represent his Buddhist nature.

In some scenes the Laughing Buddha may be found sitting on a cart drawn by boys, or wielding a fan called an oogi (said to be a "wish giving" fan -- in the distant past, this type of fan was used by the aristocracy to indicate to vassals that their requests would be granted). All of these images display Hotei as a wandering monk who goes around and takes the sadness from people of this world.
According to legend, if you rub the Laughing Buddha's great belly, it brings forth wealth, good luck, and prosperity. Hotei is also referred to as the patron saint of restaurateurs, fortune tellers and bartenders. When one overeats or over drinks, friends jokingly attribute it to the Laughing Buddha's influence.

Laughing Buddha is a symbol of joy and wealth. Nowadays everyone, even those who are not following the Buddhism and Taoism those are also started to feature the Happy Buddha in their homes and offices.This practice is even grown up in the western countries too.

Over the years, the Smiling / Laughing / Fat Buddha has come to represent several beneficial attributes such as happiness, prosperity,contentment and joy. Consequently, people in East Asia such as China and Japan have placed the Fat Buddha statue in their homes and offices.

Place a Buddha in your home to add an atmosphere of contentment and serenity. He is there to remind us not to work too hard or become greedy. It is very auspicious to light a candle on his birthday ( 8th May ) and you can ask him to grant any special requests that you may have.


Tradition or Feng Shui
While Chinese and Japanese tradition merely associates the placement of the Fat Buddha in the home or office with prayers for prosperity and happiness, there is a school of thought known as Feng Shui that also focuses on the actual position of the placement and direction the Fat Buddha statue is facing.
In Feng Shui, the reason for buying and placing figurines or statues in the home is to correct a certain imbalance in your life. The placement of particular figurines in a certain part or direction of the house is meant to bring harmony and order into your life, letting you experience a more peaceful and prosperous life. The amount of benefit achieved by such placements depends on whether the rules of Feng Shui are being followed correctly.


Types of Laughing Buddha Statues
The following is a list of Smiling / Laughing / Happy / Fat Buddha statues. These Laughing Buddha statues have been attributed to provide their owners with beneficial effects such as happiness, prosperity, contentment and wealth. As such, many people have purchased various forms of these Buddha statues to place in their homes or at their offices and businesses, hoping that they will receive some of these attributes too. You will find a number of these fat Buddha statues being the centerpiece of many home decorations.

Tips
The first thing you want to do when placing Buddha is to make sure the location is truly one of reverence. This means you should never place one in a bathroom or kitchen. Also, you want the height of the Buddha to be at least eye level. Looking down at a deity is considered rude and disrespectful. Avoid placing near electrical outlets, elect or equipment with moving parts and motors. This type of activity disturbs the surrounding energy.  Don’t put him on top of the TV. The tinny din will annoy him.

It is not advisable to keep the Laughing Buddha in a bedroom or in the dining room. This God of wealth is not worshiped or prayed to, but just displayed and its presences is purely symbolic and auspicious.

When the Laughing Buddha is seen playing with many children, (usually five in number) this symbolizes good fortune arriving from the heavens. Maitraya Buddha has long been associated with virtue of innocent joy, kindness and great gentleness. He is also associated with bringing good luck and an abundance of good Chi' when invited into ones home.


Bowl
The meaning of sculptures depicting Buddha holding a bowl points to an essential part of a monk’s life - it is a begging bowl and represents the idea that monks live off what is given or donated by others. There is also a story associated with Buddha and the begging bowl. It is said that as Buddha came close to reaching enlightenment and young woman gave him a bowl of milk rice, however at this time Buddha was fasting. Realizing that his fasting had weakened his body and he would require more nourishment in order to attain enlightenment he accepted. Having reached enlightenment he discarded the little remaining contents of the bowl symbolizing his detachment form material possessions. The link between the renunciation of material possessions and reaching enlightenment plays a prominent part in Buddhist philosophy.
Budai holds the bowl above his head to receive abundance from the heavens.


Fan
A laughing Hotei Buddha with a fan is a symbol of happiness and joy. Some scenes the Laughing Buddha may be found sitting on a cart drawn by boys, or wielding a fan called an oogi (said to be a “wish giving” fan -in the distant past, this type of fan was used by the aristocracy to indicate to vassals that their requests would be granted). The Wish-Giving Fan symbolizes happiness. Budai waves the fan to banish troubles.


Sack or bag
Sculptures of Buddha with a sack usually depicts Hotei Buddha. Hotei, meaning ‘cotton sack’ is the representation of the travelling Buddha. It is said that he wanders the world collecting people’s sadness and woes and putting them in his sack. The sack is also said to represent wealth and good fortune.


Beads
The beads, known as a ‘mala,’ represent never-ending meditation practice, even when engaged in worldly activities.


Ball
The ball has various meanings, the more popular one is that the ball is a wealth ball which brings wealth and prosperity. Other meanings include medicine balls, pearls of wisdom, and a peach or apricot representing health and prosperity. Also thought to represent a pearl. It is a symbol of the greatest treasure of all, wisdom.


Happy Hotei's come in many forms:

Safe Travels Buddha
The Safe Travels Buddha is an old-fashioned rendition. He either carries a stick with a bundle tied to the end of it or he has a sack thrown over one shoulder. Both variations include him holding a wealth ball in his other hand.


Long Life Buddha
The Long Life Buddha is seated and has a bag of blessings by his side or holds the bag in his lap. In one hand, he cradles a wealth ball raised in front of him and a Ru-Yi pot in his other hand.
Spiritual Journey Buddha


The Spiritual Journey Buddha
has quite a few symbols to study. Typically, he carries a gourd of enlightenment suspended from a stick while holding a fan in his other hand. He wears a necklace made of prayer beads.
Gourd of Enlightenment contains the elixir of youth for long life.


Earth Buddha
Also known as, Calling Earth to Witness, the Earth Buddha sits on the ground with his right hand extended so his fingers point to the earth beneath him. This statue honors the time when Buddha was repeatedly tempted by the demon, Mara, but resisted and reached enlightenment.


Reclining Buddha
Buddha awaits his transition from this life to death, which he viewed as a mere journey of transition into a different state of being.


Buddha on Coins/Bag
Buddha standing or sitting on a pile of coins or his bag is protector of wealth.

With the hand raised and the palm facing outwards, fingers extended pointing upward. The wrist is bent at a right angle with the forearm. Fearlessness or Reassurance.

The hand lowered with the palm facing outward is the gesture of bestowing blessings or of giving charity.
The hand is extended downward, palm out. Mostly on standing Buddha images, but sometimes also represented in the sitting position. Symbolizing Charity. 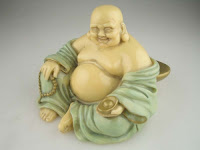 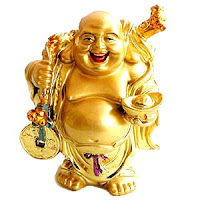 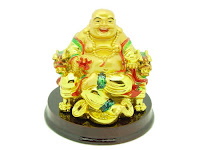 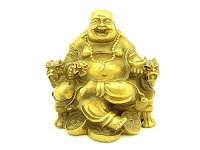